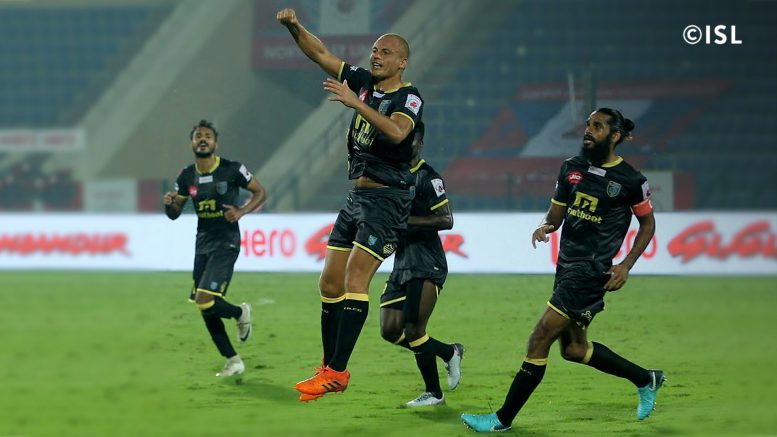 Kerala Blasters kept their play-off hopes alive in the Indian Super League by defeating Northeast United 1-0 at the Indira Gandhi Athletic Stadium on Saturday. Wes Brown’s first-half strike was enough to give Blasters the win over the ninth-placed team and propped the Blasters up to 24 points in ISL, one point shy of Jamshedpur above them, having played a game more than the Tata-owned team.

The former Manchester United headed the ball into the back of the net from Jackichand Singh’s corner.

In the 10th minute, Northeast had an early chance when Danilo Lopes failed to get pass custodian Paul Rachubka after being fed by Maic Sema.

Kerala grabbed the lead in the 28th minute when they scored from set play. Jackichand stood up for the corner and his delivery was headed into the net by Wes Brown in what was his debut goal in the tournament.

In the dying minutes of the first half, Danilo Lopes conjured up hopes of brining up the equaliser when he charged into the 18-yard-box but his shot from the left was staved off by Rachubka.

In the second half, John Mosquera, who replaced Danilo Lopes, missed another chance when his header fell into the hands of Rachubka.

Jose Mourinho blasts at Liverpool for lack of quality chances